If you're in an emergency, or at risk of harm to yourself or others,
please contact emergency services on 000.
Are you in an immediate crisis? Talk to someone now!

Men’s Health and Wellbeing WA is very excited to announce the implementation of our Man Up, Stand Up and Sign Up Social Media Campaign to advocate for a WA state-based Male Health Policy. In the light of an upcoming state election, we, as a peak body for men’s health and wellbeing, find it very timely to actively raise sector and community awareness and response to the pressing need for such a policy.

In May 2010, the Australian Government released the National Male Health Policy, the first for Australia. To accompany the release of the National Male Health Policy, a funding commitment of $16.7 million was made to improve male health through several initiatives, providing a framework for improving the health of all males and achieving equal health outcomes for population groups of males at risk of poor health.

Yet there is still an alarming gap in the health and wellbeing of Western Australian males who have distinct and diverse health and wellbeing challenges that occur in the context of a varied and expansive state, requiring a unique response. It is futile having a national male health policy with no considered, integrated and collaborative approach to its commitment and implementation on a state level. A Western Australian Male Health and Wellbeing Policy will provide the framework and foundation to drive an evidence-based, targeted, adequately funded, coordinated, and collaborative response to this critical acute health gap in Western Australia.

The Man Up, Stand Up and Sign Up Social Media Campaign will run from 15 February 2017 (Wednesday) to 10 March 2017 (Friday), with the state election on the 11 March 2017. During this time, we will be posting several scheduled messages on Facebook and Twitter. These messages will highlight various statistical data around men’s health and wellbeing, and the gaps we are still facing every day. Our request to you – your call to action – is to support our posts, engage in conversation, and generate awareness by ‘liking’, ‘e-tweeting’ and ‘sharing’ these posts to your network so as to garner traction. We will be writing to our politicians, stakeholders, members and supporters to help drive this campaign.

This is a community issue – an issue affecting all the men in our lives on so many levels – and it will be driven by the WA community with MHWWA leading the way. We will not be able to do this without your active participation. We look forward to seeing you on social media as we make our intentions of a WA Male Health policy known to government, all key stakeholders in the sector, and members of the community. Together, we can make this happen. 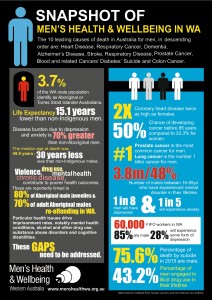